What do you imagine when you think of someone surfing? A gorge young lad/lady with perfect ‘beach hair’ effortlessly skimming along the waves and pulling a few tricks a long the way? Yeah me too. But when you’re an absolute beginner and the opportunity arises to have a surf lesson in Byron Bay you have to take it. And that’s what I did, I saw it, I signed up and then let the panic set in.

See, I have spent the majority of my life being not the most athletic, but it recent years (and thanks to a free gym through my work) I’ve discovered that I actually have some muscles, I can run a 10km and actually do some burpees. Still, the thought of a 2.5 hour lesson with some other beach babes meant I had a lot of internal panic – would I be able to do it? Would it hurt when (inevitably) I fell off? WOULD THERE BE SHARKS?

Well, in summary, I didn’t have to worry – I chose my surf lesson with Mojo Surf and they have the option of an afternoon surf lesson, a 3 day course, or even a week – all depending on how long you want. In my group of surfers there was a mix of levels, but they took us beginners off for a Surfing 101 chat before we headed out into waves.

We spent a while on the sand, practising the jump-up technique required for a surf – and this is where I was thankful for the burpees I’d been practising in the lead-up to the holiday. It does require a lot of core and upper body strength to surf – I’m not going to pretend it doesn’t – so please take this as a warning, that if you want to surf and like me you’re not the fittest surfer on the beach, do a few burpees before you go. 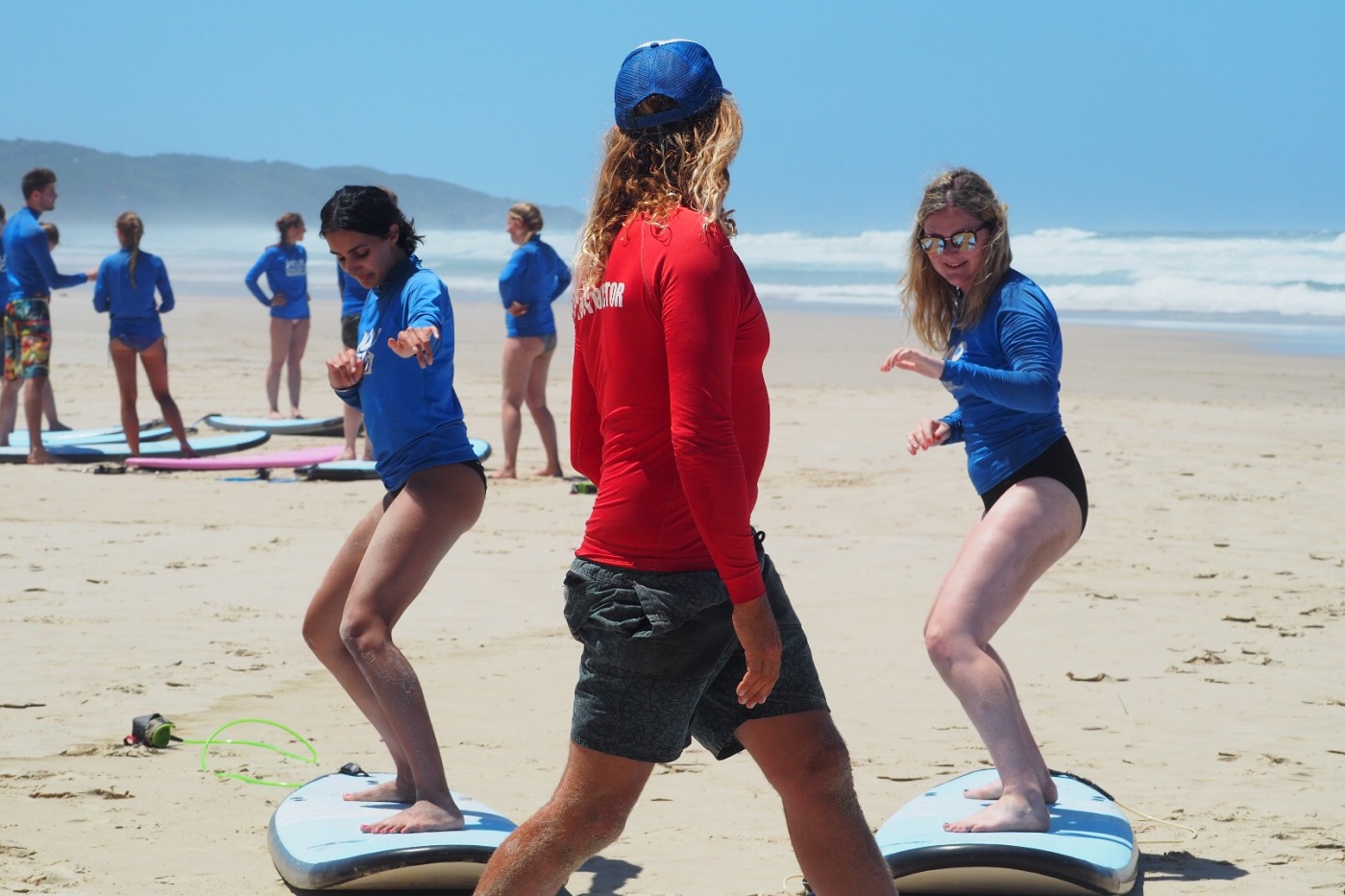 And then after that, that’s it – you’re out on the waves. The number one thing I have to say about surfing is it’s really, really fun. The feeling of catching a wave was so exhilarating – like being on a mini rollercoaster that you have the power to stop. As I’m a bit of a scaredy-cat, my first few attempts just involved me catching waves whilst lying on the board, I was enjoying the feeling of speeding along so much I kind of forgot the point was to get myself up.

The great thing about the Mojo Surf lesson, was that the instructors were in the sea with us, and they were there to help us get up on the board. It took me quite a few attempts, but eventually I made it up on the board! The only frustrating thing is there aren’t any pictures of me actually surfing – as you’re not allowed to take your own pictures, so these pics on this post are the ones taken by the company (and please go easy on me – I don’t usually post pics of me in my swimmers on the internet). Ultimately, you’ll have to take my word for it that I made it up on the board, even if I only lasted up there for a few seconds.

Ultimately, to answer my initial worries about the lesson – yes I could do it! Yes it hurt when I fell off – and it also hurt the next day because my body ached like hell. But it was so worth it, and I would do it again in a second – in fact I’ve been looking up ways to surf now I’m back in the UK. And the final question – didn’t see any sharks. DID see jellyfish, but luckily none of them got me.

The most dangerous thing I had to worry about was the sun burn. Seriously, if you’re going surfing, SUN CREAM UP TO THE HIGH HEAVENS, because you’ll be having too much fun to realise you’re burning your legs/feet/hands/scalp or all of the above like I did…

And that, in summary, is my experience of surging as an complete beginner. It was such a great experience, and if I ever had the chance to go again, I would – maybe even for longer. Check out Mojosurf if you want to surf around Sydney or Byron Bay – I thought they were a really great company to learn to surf with. If you have any more questions about the experience please just pop a comment down below!

Thanks for reading! x

3 replies on “Surfing For Beginners”

There was an error retrieving images from Instagram. An attempt will be remade in a few minutes.