Bonjour! The next in my Essentials series is the little old city of lights/love – whichever you prefer. It’s a big city and there is a lot to fit in when you’re there, so I have listed the essentials for your trip, from how to get there, to what to do and eat when you’re there. SO l’escargot!!! Oh wait, sorry, LET’S GO…

Currency: Euros. As always, my recommendation for bank cards abroad would be Monzo as I think it has a really great exchange rate and is accepted mostly everywhere.

Getting There: If you want to travel via Eurostar, it’s only a 2 hour journey from London and Business Class or not it’s a really enjoyable experience! It lands you directly in the centre of Paris at the Gare du Nord, which is an advantage over flying in and then travelling in from the airport.

Saying that, you can often find really good deals on flights to Paris – and the flight time from London is tiny! Or, if you want to go full-on budget mode you can go via the Megabus, which is a hearty 7 hour drive from London Victoria station. I’ve done it before and managed to get through almost a whole book, so it has it’s advantages, but if you’re strapped for time maybe air/train would be best.

Travelling Around: Some of the best parts of exploring Paris are seen by just walking around the Parisian streets, but it’s certainly a long way between the majority of the landmarks.

The subway/underground is a standard fee of 1.90€ a ride, however far you go, but you can buy a book of 10 tickets at the station which brings each ticket down to 1.45€ each, which is great if you definitely know you’re going to be taking that amount of trips throughout your trip.

Dishes you needed to Eat:

Sorry that’s a bit of a cliché from me but France is the cheese motherland after all. On our visit we had dinner at a cheese fondue restaurant, which was very, very cheesy, but if you pick pretty much anywhere to eat you’re bound to find a menu filled with warm, homely cheese & cream filled delights.

This may not be up there on the top of your list, but it has been something I’ve wanted to try for a while. In all truthfulness, they actually tasted alright, as I think they were smothered in garlic sauce. Once you get your head around the fact you’re chewing on a little garden snail, it’s actually quite tasty. 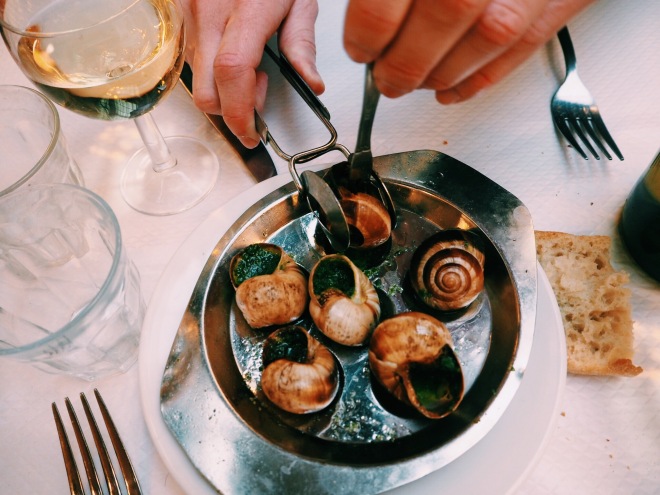 Also known as – my favourite little breakfast treats. Croissants can be found worldwide, but in Paris – and France especially – they just seem to taste that much better. Probably because of it’s butter content, but that’s absolutely fine with me.

The iconic staple to the Parisian Skyline is an essential when you’re visiting the City of Light. Prices start at 10€ to go up it, but that involves walking up to the second floor. If you want to go to the top you’r looking at forking out for a 25€, but at least you get to do it all in an elevator.

If you don’t fancy going up the tower then that’s absolutely fine – it’s still great to look at from down below. It’s surrounded by a large park which is perfect for chilling in when the weather is good. From 8pm the entire tower lights up for a 10 minutes sparkly display – and it really is magical to see. 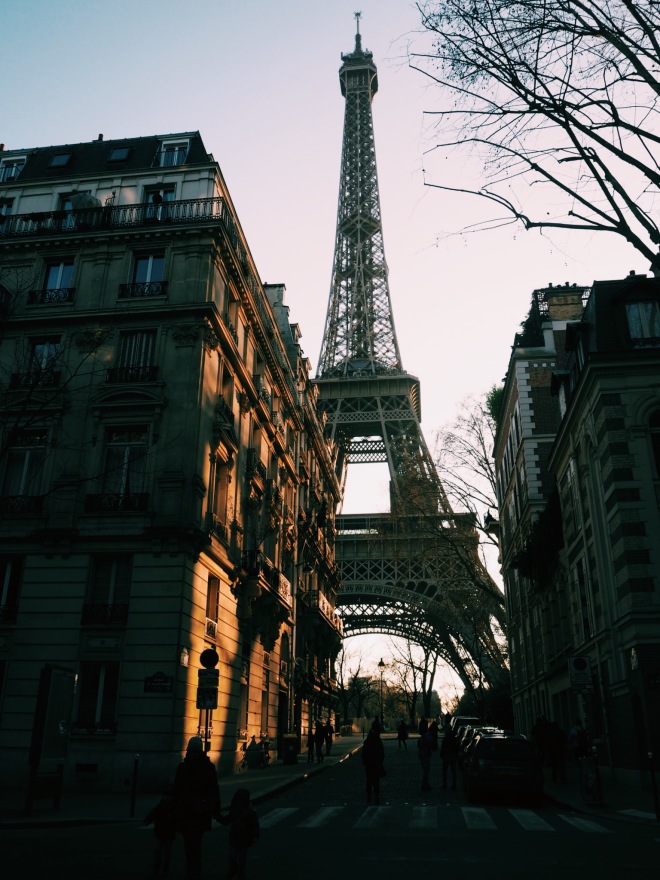 Well renown – whether you’re a Tour de France fan or not, the Arc de Triomphe and the surrounding Champs-Élysées are worth a visit. You can visit the arc itself, and even pay to go up and visit for a view of the Paris skyline (but my motto is – if you can do it at a rooftop bar, then do it with a drink in your hand instead).

Do be aware that the Champs-Élysées is the touristy strip of Paris, with it’s designer shops and high-priced cafes, so take a stroll down there for the experience and for a bit of window shopping – but perhaps not for a bite to eat.

Another iconic staple of Paris, the Louvre museum stands out – quite literally – from the ground. Home of the famous Mona Lisa, it’s a great way to spend an afternoon exploring the gallery, but tickets will cost you 15€ . If you don’t have the time – or the interest – it’s still good to go and take a look at the large prism popping out of the ground. The Louvre is also in front of some large Tuilerie gardens which are nice for a walk around. 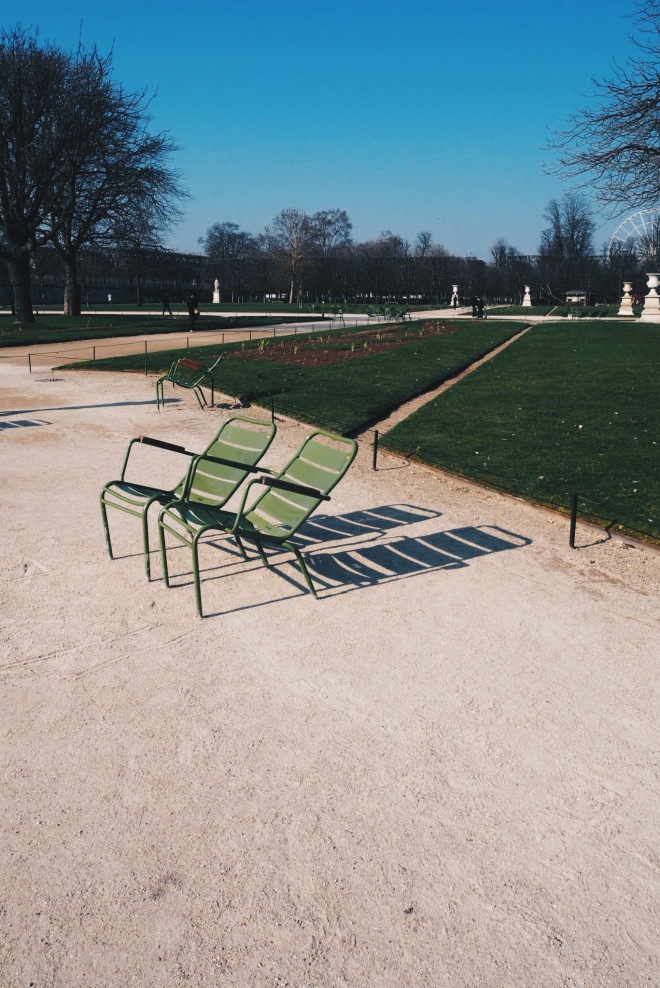 Worth the walk to visit Sacré-Cœur and the surrounding lanes for a great view across Paris and to also experience the little Parisian streets that surround it. You can enter for free and even climb up to the top – but be warned as it’s 300 steps and there’s no lift!

If you have the time:

Personally a visit idea that terrifies me – I don’t do that well in small spaces underground – but The Catacombs are an ancient, underground cemetery that runs underneath Paris. For 45 minutes you can take a tour around the rows of skulls –  if that’s your thing – at the cost of 13€. Maybe not for me though, you can find me back up on earth with a glass of vino instead.

The hilly slopes of Montmarte are a treat to explore – personally I found them at their most enchanting early in the morning in the search for breakfast, before the city had properly woken up and the little streets were still sleepy and quiet. Alternatively, if you are around the area int he evening it’s also a hotspot for great restaurants and bars that won’t be as busy as the more central tourist traps.

This is for if you really have a few extra days in your trip, as the Palace of Versailles lies outside of Paris, but only a short train ride away. I’ve never been personally, but it’s on my bucket list, as the palace and it’s grounds look gorgeous. For a day pass you’re looking at spending 20€, but with that you get to explore the historical palace and it’s infamous gardens.

For those who are also a child at heart you can also find another world renown staple – Disneyland. To save on the extortionate prices of staying in the park you can just visit for the day and explore as you wish! It’s £56 for a day pass to one park, and £73 for access to both parks – if you can fit them all in one day! I’ve been before – when I was 8 years old – and I had the time of my life, but granted I wasn’t forking out for the high prices like my parents were so there’s that to bear in mind (p.s thanks Mum & Dad!)

A Cruise on the Seine

Personally not a venture I’ve done myself, and I prefer to walk along the Seine by foot as there’s lots to take in and see on the way. But there are plenty of offers when visiting Paris to take a trip on a river cruise, and on a perfect, sunny day it sounds like a treat. A good bargain would be to pick up a hop-on-hop-off boat trip which can also help you get around Paris if you’re feet get a bit sore from the walking, and you can travel via a more scenic route!

You won’t find me in line for a show at the Moulin Rouge personally, but it’s worth a trip (preferably on your way to Montmarte) to stop by and take a look at the famous red windmill.

If you’re planning on visiting Paris soon let me know in the comments! More posts in this Basics series will be coming soon, but in the meantime check out my Grundy Travels Instagram for the latest updates!

Thanks for reading x